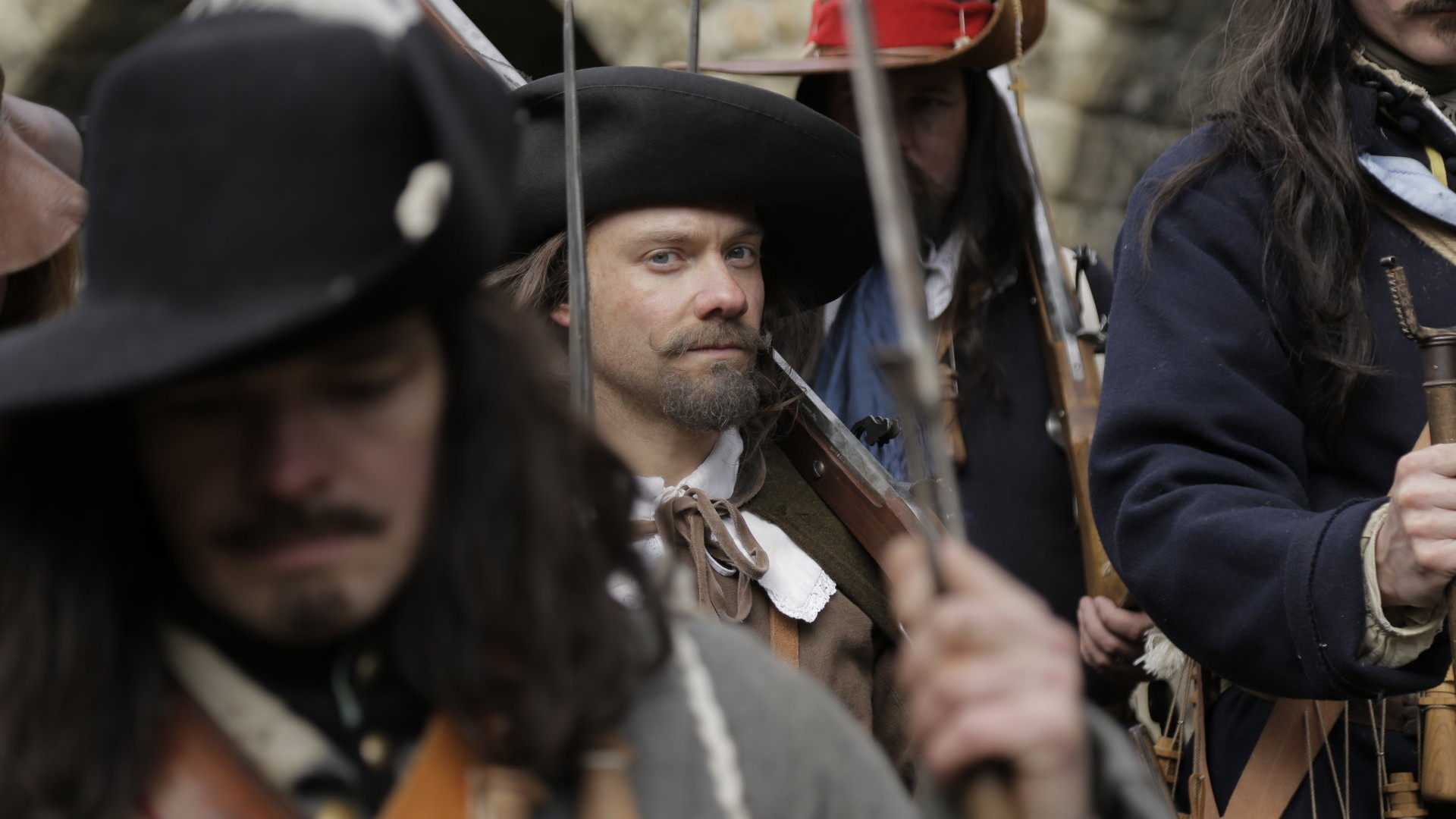 The last great religious armed conflict in Europe, the Thirty Years’ War, began 400 years ago, in 1618. Ostensibly a battle between Catholics and Protestants, the war was in fact the result of a complex mixture of competing interests and a thirst for power and territory which involved the entire continent, but which caused particular destruction in Germany. Today’s conflicts in the Middle East remind many of the Thirty Years’ War, as they involve weakened state structures, ruthless warlords and foreign players who encourage division among religious denominations. Is the Islamic world currently experiencing a wide-ranging conflict similar to that which tore Europe apart four centuries ago?

The docu-drama Thirty Years of War focuses on the individual fates of five different characters from all walks of life: people who lived and suffered through the conflict, people who waged war or financed it. From the banker to the mercenary, all these people actually existed. The film documents their lives in detail, based on their own journals and other historical sources, and brings their experiences to life in powerful, moving narrative scenes.

The Jesuit Jeremias Drexel serves as court preacher to Maximilian I of Bavaria. He is a Catholic hardliner who believes the war serves a sacred purpose.

Hans de Witte, a merchant from Prague, finances the imperial campaigns. His world is centred around the stock exchanges of Frankfurt, London and Amsterdam. He intentionally encourages an increase in inflation and eventually uses an intricate credit system to support the rise of General Albrecht von Wallenstein. Incredibly, de Witte is actually a Calvinist – a member of a denomination persecuted by the emperor throughout the empire.

The farmer Marta Küzinger lives in a village in Upper Austria. Like most of the region’s other farmers, she is a Protestant. When she is twenty years old her farm is destroyed by passing troops. Soon after, violence flares when efforts are made to convert the country to Catholicism by force. Her husband is killed in a farmers’ rebellion, but she refuses to give in to her anguish. She passes on her faith in secret, thereby contributing to the continued existence of Protestants in Austria to this day.

In 1627, Peter Hagendorf becomes a mercenary in the forces of Field Marshal Pappenheim. He is one of the few to survive the entire war. Largely uninterested in the ideological motivations driving the conflict, Hagendorf fights for the spoils of war, his pay and survival. He travels more than 22,500 kilometres in the course of the war, occasionally accompanied by his wife and children. When peace is declared in 1648, he is at a loss – he has never known anything but fighting.

In 1632, the Augustinian nun Klara Staiger is unexpectedly named the prioress of the Mariastein monastery in Bavaria’s Eichstätt. From this point on she is responsible for ensuring the survival of her small sisterhood, a task made more difficult by the alternating attacks by the Swedish and imperial troops who loot and pillage the monastery. It takes Klara, a strong and wise woman, years to rebuild her destroyed abbey.

An innovative narrative approach will serve to bring the historical events closer to the viewer: similar to modern-day news reporting, an off-camera journalist will ask the individual characters questions and they will talk openly to camera about their hopes, fears and convictions. In Austria, the renowned actor Adele Neuhauser is in negotiations to assume this role. This narrative device allows for each country to define their own “reporter”: it could be a nationally respected journalist, an actor or other important, trusted figure.

As the film travels back in time to the 17th century, it will also journey through the modern-day regions of Germany and Austria that were battlefields during the war. This establishes a fascinating visual contrast between the past and the present. In addition, renowned experts will analyse the events of the Thirty Years’ War: so far, the political scientist Herfried Münkler and the historians Christoph Kampmann and Georg Schmidt have confirmed their participation. The experts will also help to place the 400-year-old war in a modern context: can the Thirty Years’ War, this tangle of warring states, rebellions and religious conflicts, be compared to the situation in the Middle East of the present day? Is the Islamic world currently experiencing a similar disaster to that suffered in Europe centuries ago? This is a divisive issue: while some experts warn against drawing easy comparisons, others look to the Peace of Westphalia for diplomatic solutions that may be applied to secure peace in the Middle East.